Posts about those who have left us

I know now why Donald Trump won the election: because Sheri S. Tepper was no longer alive to hold him at bay. Tepper’s novels are sometimes described as “ecofeminist sci-fi,” but that barely begins to describe the spirit that pulses and crackles in her work: as wide and nourishing as the sea, and as capable of drowning you in an instant. Donald J. Trump – a misogynistic con man with an impossibly large ego, a need for outside vengeance over every slight, and a sadistic brand of dominance politics – is a Tepper villain from her literary version of Central Casting, and if life were one of her novels, he would have been grabbed and strangled by a cyborg pussy willow or crushed to death when the earth itself shook Trump Tower to pieces.

The limitless evils of man – grasping, needy, controlling, thrusting, swaggering man – were an endless theme for Tepper. In her books, women’s lives, women’s bodies, and the fertile planets they call home are almost always in danger of assault by these stereotypically male villains (not all of them men). But her grim view of the masculine power is matched by the remarkable reslience of its feminine counterpart: courageous, clever, compassionate, wily, and – when needed – hard-headed. Oh, so hard-headed. Tepper’s ecofeminism had no truck with sentimental earth-mother tropes of gentle peaceful softness. No, Tepper’s heroines (not all of them women) hit back, hard, and often in ways their male adversaries never even suspect.

Sheri S. Tepper came to science fiction late in life. For two and a half decades she worked at Rocky Mountain Planned Parenthood. Within the organization she was famous for her force of will and her insistence on institutional self-reliance: women’s health and access to abortion needed to be protected from the ground up. Lobbying is for other people who put too much trust in government. We know that we’re safe only if we take care of ourselves in ways men can’t take away no matter how hard they try. She started writing at the age of 54, near the end of her tenure at Planned Parenthood, and never stopped. Her most recent novel, Fish Tales, was published in 2014, when she was 85.

I was introduced to Tepper’s novels in the early 1990s, when she was at the absolute peak of her powers. Many of her earlier novels are fine but not especially interesting; her later work tended towards the predictable and wooden. But in the five-year period between roughly 1987 and 1992, she wrote a remarkable string of compelling, weird, beautiful, challenging, and heart-rending novels: After Long Silence (1987), The Gate to Women’s Country (1988), Grass (1989), Raising the Stones (1990), Beauty (1991), Sideshow (1992), and A Plague of Angels (1993).

I started with Grass, which I still think is her best. Marjorie Westriding-Yrarier is sent with her family to a prairie planet called Grass to try to find out why Grass seems to have been spared a plague afflicting other planets. But something is off from the moment she arrives: the local nobility are stand-offish and obsessed with a variant of fox-hunting. She starts poking around on her own, and then – suddenly, without warning, about a hundred pages before I was expecting – things are suddenly moving extremely quickly and with astonishingly high stakes. I love Grass not so much for the way everything ultimately comes together as for its exquisite suspense and pacing. There are a few set pieces – including a quiet but deeply ominous exploration of ancient ruins and a literal high-wire chase as part of a deadly monastic initiation ritual – that are up there with John Le Carre’s best.

No, I was wrong, Tepper’s best novel is the loose sequel to Grass, the gentle (for Tepper) and wonderful Raising the Stones. A quiet farming community on a quiet backwater planet sets in motion a strange and ancient … something … that doesn’t seem to bother them but deeply alarms some of their galactic neighbors. The plot unfolds with a calm elegance: things happen at first slowly and then quickly, but every twist arrives right on time and with a feeling of natural progression. The multiple villains are dastardly; the heroes believably ordinary; the resolution entirely satisfying. (There is also some stage business with portals that is exceptionally clever.)

I can’t say too much more without giving away crucial plot twists (and in a Sheri S. Tepper novel, the plot twists are always crucial), but let me say this much. Raising the Stones contains the single best portrait of a utopia – feminist or otherwise – I have ever seen. It is both genuinely appealing, in that it is somewhere I would very much want to live, and genuinely plausible, in that the changes it would require to our world are (making allowances for science-fictional speculation) something humanity might actually be able to accomplish.

Her other novels are weirder: the details of the world-building stay with you. After Long Silence takes place on a planet where trained singers must go with travelers to keep giant crystal outcroppings from shooting forth deadly fragments; Beauty weaves classics of the European fairy-tale tradition into a dystopian vision of future Earth. The Gate to Women’s Country, perhaps Tepper’s most famous novel, features a society where settlements are divided into men’s and women’s spaces. Women live inside towns, protected by the men who live in military encampments just outside (complete with phallic watchtowers). Suffice it to say that things are very much not as they seem.

A good Sheri S. Tepper novel could be counted on for three things. I have already mentioned her command of suspense and her visionary feminist imagination. (Multiple of her novels hinge, in one way or another, on unflinchingly rational family planning; another climaxes with a scene of people literally having sex with a planet.) But she was also exceptionally good at withholding and revealing information. She had a sideline (under the pen names B.J. Oliphant and A.J. Orde) as a mystery writer, and it shows in her science fiction. Sometimes, she uses the dread of the deadly unknown to have her characters and societies avert their eyes from great mysteries; other times she keeps back a crucial detail or two from what seems like a complete description. When it comes time for her to lay her cards on the table, she never does it all at once: the succession of surprises, when done right, makes for compelling reading.

Sadly, this gift gradually departed her over the course of the late 1990s and 2000. With a few exceptions, like The Margarets (2007), her later novels feature single big reveals that are easy to spot coming. Better to turn instead to her earlier work, particularly the nine short novels making up the True Game series (1983 to 1986), which starts off seeming like one thing and ends up as quite another entirely.

Let me leave you with a passage from the ruthlessly unsentimental The Awakeners (1987), which I think best captures Sheri S. Tepper’s feminist vision:

Of what good are dead warriors? …

The good of dead warriors, Mother, is that they are dead.

2016 has not been a good year for the obituary page. Already we have lost Umberto Eco, Elizabeth Eisenstein, and Bob Elliott, each of whose works I encountered at just the right time in my life. I hope to write about Eisenstein and Elliott in due course, but I would like to remember Eco with a quotation from the end of The Island of the Day Before:

Finally, if from this story I wanted to produce a novel, I would demonstrate once again that it is impossible to write except by making a palimpsest of a rediscovered manuscript–without ever succeeding in eluding the Anxiety of Influence. Nor could I elude the childish curiosity of the reader, who would want to know if Roberto really wrote the pages on which I have dwelt for far too long. In all honesty, I would have to reply that it is not impossible that someone else wrote them, someone who wanted only to pretend to tell the truth. And thus I would lose all the effect of the novel: where, yes, you pretend to tell true things, but you must not admit seriously that you are pretending.

Robert Burt, emeritus professor of law at Yale Law School, died Tuesday at the age of 76. I took his Family Law course in the fall of 2003. He was a thoughtful and kind teacher, and his course expanded my sense of families and my sense of law. I vividly remember the day we discussed aging and family support for the elderly. He told us, with a bittersweet smile on his face, that life is a tragedy. It was a message whose full truth we come to only with time and its ravages; in delivering it, he reached across the years between us and for a moment held us close. 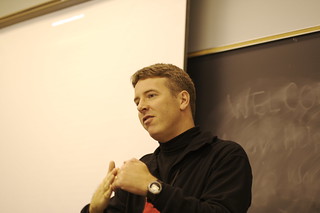 Greg Lastowka died last night, much too young, after a long and difficult struggle with a rare and aggressive throat cancer. Greg was a law professor at Rutgers-Camden, the world’s leading legal academic authority on virtual worlds and online games, and a friend. He will be missed.

I discovered Greg’s work the way a great many people did: through his groundbreaking 2004 article with Dan Hunter, The Laws of the Virtual Worlds. It gave the first in-depth treatment of virtual worlds in the legal literature, and it posed fundamental questions about how property and governance ought to work online. When it hit SSRN, I had just competed a long and sprawling paper on law in virtual worlds, and my first reaction – after the sinking sense of being preempted – was to wonder just who it was who had beaten me to the punch.

The answer, it turned out, was a modest, generous, and thoughtful young law professor who was more interested in being part of a thriving academic community than in building a superstar’s reputation for himself. Greg, I came to learn, was a loving husband and father, a former Peace Corps volunteer who had served in Turkmenistan, and a dedicated public servant who took on the most unbelievably thankless tasks that university administrations can slough off onto their faculty. He was a booster of good scholarship wherever it could be found, a low-key and patient institution-builder, and a calming presence in contentious debates. Greg was a mensch.

He was a generation ahead of me in the academy, and he was one of my favorite people to see at conferences. We wrote on overlapping topics and he was helpful and encouraging to me on many occasions, something that matters a lot when you are just setting out in the academy. One of the great satisfactions of my first few years of teaching was to give a reader’s report enthusiastically advising Yale University Press to publish his book, Virtual Justice. Greg built a professional and personal identity for himself that struck me as very much worth emulating. At work, he studied amateur creativity in Minecraft; at home, he played Minecraft with his son the precocious programmer.

His illness was a bolt from the blue. It came on quickly and awfully, and gave him no good options. He tried experimental therapy, but he also – from what I could see – made his peace. He spent his final year with his family, whom I have never met but feel almost like I know through Greg’s wonderful stories. And he connected with his friends and colleagues, old and new. He was a gentleman to the last.

Good bye, Greg. Thank you for logging in and playing awhile with us.